A leader in the Canadian ski industry and champion of the Selkirk College Ski Resort Operations & Management Program (SROAM) has been honoured with a lifetime achievement award from the Canadian Ski Council. Bob Falle is a dedicated outdoor recreation and tourism professional on staff at Selkirk College for over 25 years—originally as an instructor and then in the role of chair for the School of Hospitality & Tourism. He is overjoyed with receiving this year’s Colin S. Chedore Lifetime Achievement Award.

“I am very honoured,” says Falle, with a sense of adventure that clearly infuses his being. “It was humbling and the fact that it’s a lifetime achievement award—well, I’m not done yet.” Paul Pinchbeck, president and CEO of The Canadian Ski Council, says this award recognizes Falle’s hard work and dedication to educating the next generation of snow sports industry leaders in Canada. 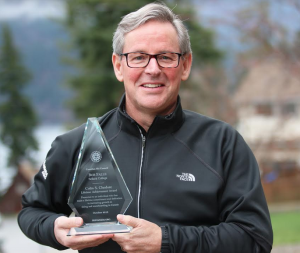 “Bob is being recognized for his contributions to the sports of skiing and snowboarding through education, research, advocacy, support of tourism in Canada, and the promotion of the sport,” says Pinchbeck. “Bob has made significant achievements and accomplishments in increasing growth in our sports through his dedication to the education of his students through the Ski Resort Operations &amp; Management Program and other tourism programs at Selkirk College.

Without his commitment to the educational programs Selkirk College provides, the Canadian industry would not have the qualified and highly skilled employees that it does today.” Falle hails from Toronto where he started teaching skiing part-time at age 16 with Scarborough Parks and Recreation. After high school he worked at Don Valley Ski Centre, “a tiny little place right in the city.” Ontario ski hills were small and some didn’t even have chairlifts, but Falle’s enthusiasm was sky high and he was hooked.

“I enjoyed it right away… the freedom of the sport, being outside, and the vibe. The whole thing just got me,” he says. “I grew up living in the suburbs of Toronto dreaming of living in a place like the Kootenays.” As a ski instructor, Falle’s passion grew as he experienced others enjoying the sport. In 1974, he attended Humber College taking the Recreation Leadership and Ski Resort Management diploma programs. Part of what captured the industry veteran early on is the diversity of the work in a dynamic profession.

The total effect of BC colleges on the business community in British Columbia is $7.8 Billion.