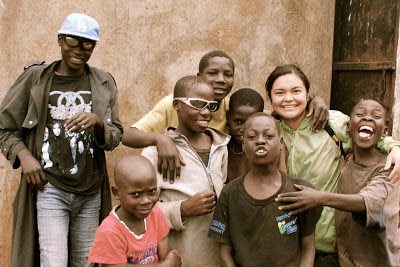 Priscilla Bartleman-Wolf wants to build a house. It’s a dream many of us have: to construct a home according to our own unique ideas and needs. A place where we feel safe and secure. A house that stands apart from its neighbours. But there’s a difference: Priscilla doesn’t want to build the house for herself, but for street kids in Uganda.

A graduate of the Douglas College Co-occurring Disorders program, Priscilla did a three-month practicum in Uganda last year where she worked with traditional healers at a hospital and taught literacy to primary school-age children. She loved Uganda so much she stayed an extra three months, hatching the plan to launch the Omusana Project. After returning to Canada briefly, she went back.

The goal of the Omusana Project is to build a house for teenagers who have dropped out of school to give them a place to live and to teach them how to farm as well as other skills.

Priscilla saw the need for such a house when she learned in Uganda kids of all ages were often put into the same classes at school, depending on how far along they were in their education. Thus, you might have a 16-year-old in a class full of 10-year-olds.

“Some of the older kids get really frustrated, so they drop out,” she says.

Now that she’s back in Uganda, she’s working with her partners - husband Brian and two Ugandans, Julius and Moses - to open a centre where the kids can drop in and chat. Outreach in the form of football, music, dance and drama will be offered twice a week. Sunday night will be movie night, and meals will be provided.

In the next few months she hopes to buy land to begin growing food and raising animals.

“This is so the kids can start learning how to look after the land and animals. My personal preference is to start with pigs - because I love pigs - and chickens. Once we establish the land and a relationship with the kids, we will start on the dorms.”

Priscilla says through her project in Uganda, she also wants to make people aware of the fact that B.C. has the highest child poverty rate in Canada.

“We need to take care of children both here at home and across the world. I want to connect these two pieces and bring that to light. I want to highlight that no child should be left without a home.”

For every $1 students invest in BC colleges, they receive a cumulative $3.10 in higher future earnings.